Tampere Machines Game was a game project I worked on the Spring 2013. The goal of the project was to develop a game for three companies Cargotec, Sandvik and John Deere to be used on their collaboration project.

The idea was to use a simple tablet game to get people familiar with each other and companies in a quick and funny way. The project was one of the Demola Spring projects 2013. 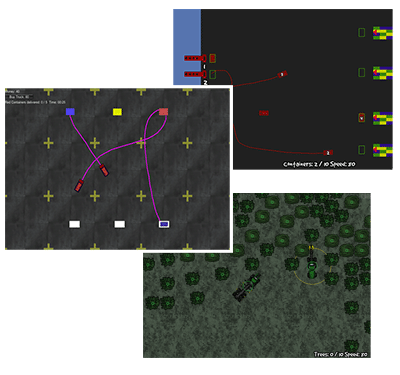 The game has three different environments corresponding each company. Cargotec part of the game takes place in terminal area, John Deere in forest and Sandvik in openpit and underground mine. The team included three members. My job was to create most of the graphics and program part of the game. Game was developed in Unity3d. Unfortunately because of the game was done for internal use of the companies, a playable version isn’t publicly available.

Bodiless is a clever platformer where the main character has no body. Only hands, feet and head. Player can use these to move on the ledges…

You promised to take care of your friend’s turtle while she is away. However, you got drunk and your other friend put an extremely dangerous…